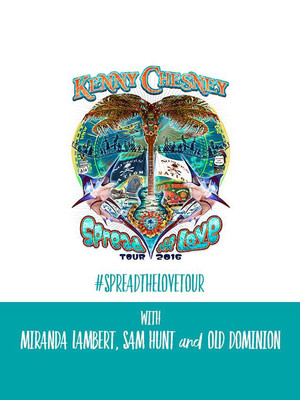 Chesney and Old Dominion are back on tour following their successful 2015 engagement!

They're teaming up again!

Everyman country star Kenny Chesney is teaming up with Old Dominion once again this summer, following the success of their 2015 collaborative engagement, The Big Revival Tour. The Spread The Love Tour will be hitting PNC Music Pavilion in Charlotte, NC, June 25, 2020.Chesney has won a nationwide loyal following for his pop-friendly and humble persona, and Old Dominion have seen their career pick up once again, blending hard rock instrumentation with Nashville country.

Chesney's star is still on the rise with a career has has slowly built up over the course of 20 years, marking him out as one of the hardest working country artists in the industry. His big-time breakthrough, came with 1999's Everywhere We Go, which sold over two million copies and spawned two number one hits.


Old Dominion boasts some of the best songwriting talent in modern country, with songs covered by the likes of top-flight modern country songwriters including the Band Perry, Keith Urban, Luke Bryan and Chris Young. They came to the fore last year with their hit single Break Up With Her, notable for its Back To The Future-themed music video.

Sound good to you? Share this page on social media and let your friends know about Kenny Chesney & Old Dominion at PNC Music Pavilion.