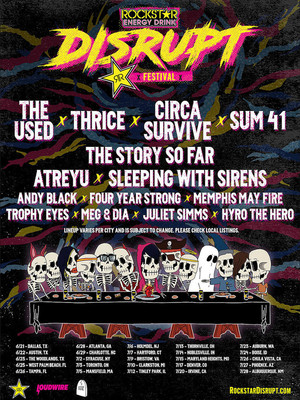 A chance to hear The Used at their very best

The Inaugural Summer Jaunt Of the Disrupt Festival

Filling the pop, punk and emo festival-shaped void left by the discontinued Vans Warped Tour, the Rockstar Energy Disrupt Festival is serving up the biggest alternative acts during their inaugural Summer tour! Over the course of 25 city stops, the inaugural line-up, which includes headliners The Used, Sum 41, Circa Survive and Thrice, will hit two stages for each date, allowing fans to experience all of their favorite bands over the course of the day.

Overcoming the struggles with drugs, poverty and life on the streets, members of hard rocking screamo quintet The Used burst out of their small hometown of Orem, Utah and into the alt-rock mainstream with their major label self-titled debut 2002. Six albums and multiple gold and platinum certifications later, the outfit maintain their post-hardcore roots but experiment and take inspiration from classic rock, grunge, blues and pop rock.

Other artists on the line-up include The Story So Far, Sleeping with Sirens, Four Year Strong, Trophy Eyes, Juliet Simms, Hyro the Hero, Memphis May Fire and Andy Black.

Sound good to you? Share this page on social media and let your friends know about Disrupt Festival at PNC Music Pavilion.