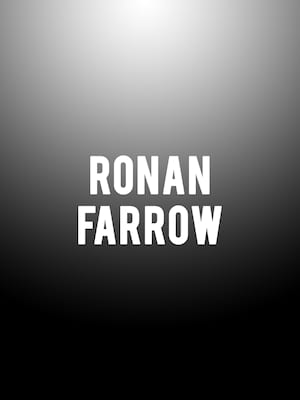 A scoop-filled book, part reporting memoir, part spy thriller . .. Riveting and often shocking . . . Catch and Kill has gone off like a hand grenade in the world of New York media

An Evening Of Conversation With Ronan Farrow

Paradigm-shattering investigative journalist Ronan Farrow counts a Pulitzer Prize for Public Service, a National Magazine Award and a George Polk Award amongst his many accolades. Bestowed upon him for his unparalleled reportage of the most important issues of our time, they highlight a fearless and relentless quest for truth. Join the luminary in an evening of conversation centered around his newly released book Catch and Kill: Lies, Spies, and a Conspiracy to Protect Predators.

Part memoir, part spy thriller, Catch and Kill is a cinematic account of the Harvey Weinstein investigation and the role Farrow himself had to play in the downfall of the Hollywood power broker. Farrow gives the reader a unique step-by-step insight into the process of catching the predator, from the early days in which the Weinstein machine's attempts to silence him led to pressure from his then-employer ABC. Farrow took the story to the New Yorker instead, in turn leading to a shadowy organization spying on Farrow and the victims. A magnum opus, the true story is a harrowing and extraordinary examination of the abuse of power.

Sound good to you? Share this page on social media and let your friends know about Ronan Farrow at Belk Theatre.